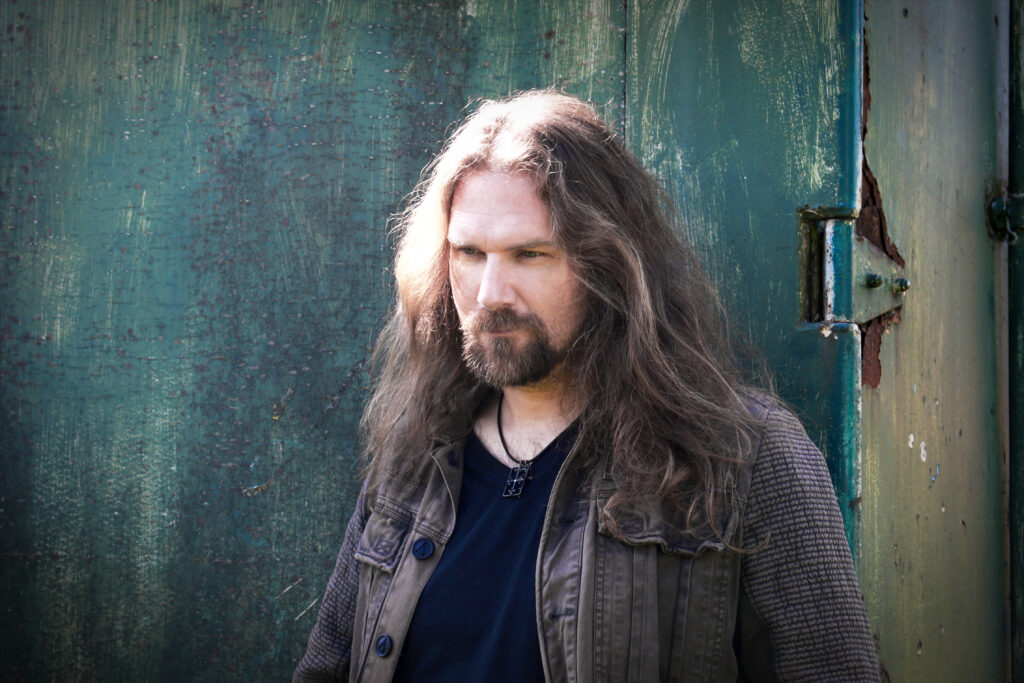 In November of 1994, at the age of 16, Kristoffer was asked to fill in at a gig of his brothers band - Pain of Salvation.
Things went well and he was asked to join the band and a full member early 1995.
1997 Pain of Salvation recorded and released their debut album: 'Entropia', followed by their second studio album 'One Hour By The Concrete Lake' only one year after.
In 2000 they released the acclaimed album 'The Perfect Element' and in 2001 they got the opportunity to open up for Dream Theater during their 'Six Degrees of Inner Turbulence'-tour.
2002 saw the birth of their most praised album to date: 'Remedy Lane' and their place as one of the most renowned bands in the progressive rock/metal-scene was secured.
Kristoffer played in Pain of Salvation up until 2005, recording the acoustic live album '12:5' and the pretentious 'BE' (studio version, live version, live theatre DVD) and touring the music all over the world infant of thousands of fans.
Early 2006 things didn't work out to well logistically, as Kristoffer had moved down to The Netherlands, and was asked to leave the band. Kristoffer then went on as a session player for those who wanted him live or in the studio.
Playing with bands and artists such as Neal Morse (US), Lana Lane (US), Damian Wilson (UK), Mr. Fastfinger (FIN), Dark Suns (DE), Harmony (S), Omnia (NL), Bert Heerink (NL), Semantic Saturation (US), For All We Know (NL) and many more.

In 2007, Kristoffer released the album 'Synchronized' with the art rock band 'DIAL' that he started together with his wife Lilo.
This was the start of Kristoffer writing his own music and would lead up to his own solo career.
The album was recorded and produced by Devon Graves (Psychotic Waltz).
(The friendship between Devon and Kristoffer later turned into the release of the album 'Behind The Black Veil' (2010) and their band 'The Shadow Theory'. Though the album was well received, the band split up shortly after the release as Devon was asked to rejoin with Psychotic Waltz. So, in 2012, Kristoffer finally took the courage to release his first solo album - RUST.
First released as a limited edition LP in 2012 and then rereleased on CD in 2013 with two extra songs and then again in 2020 as an extended version, contain three extra bonus tracks.
The album was well received, although many thought Kristoffer would stay closer to the progressive metal he was know for playing.
Kristoffer's own music, however, is more mellow.
A spiced up singer/songwriting with influences of symphonic rock and postprog.
And with this blend, he has certainly created a sound of his own. In 2016, four years after his debut album 'RUST', Kristoffer finally came with new music.
The album 'The Rain' saw the light of day with a full album play through performance with an 11 piece band.
The emotional concept album captured the audience at the venue and you could hear a needle falling in-between songs. In the years that followed, Kristoffer continued making new music and finally had enough to release not one but two new albums.
They were both to be released in 2020 but due to the pandemic, only the album 'Homebound' was released.
This album also came as a limited edition DVD, featuring music videos for each song.
The DVD-edition was sold out in one week of presale. Instead of releasing the second album ('Empty') after 'Homebound'. Kristoffer felt the need to get something else out of his system first. And so his 2021 release 'Let Me Be A Ghost' came first.
A dark story that got great reviews and reactions all over the world having venues asking for his performances once the pandemic restrictions were lifted. Kristoffer has always been keen on finding the right sound and feel to his music.
The album 'RUST' had no less than 27 guest musicians and 'The Rain' used an actual 17'th century church organ, recorded at location. And though many instrument can easily be played by synthesisers and perfect samples, Kristoffer spent lot of time finding the right sounds and recording as much as possible with analogue instruments and sound effects.

In 2017, Kristoffer was asked to join legendary prog band Kayak (NL) as they reunited for another go.
Appearing on three Kayak albums ('Seventeen' 2018, 'Live 2019' 2020 and 'Out of This World' 2021) Kristoffer also join Kayak on two European tours, including their 2022 farewell tour. Kristoffer loves the different dynamics of being in a band, being a session player and doing his own music:
"Being able to switch between the different roles is a blessing. To play in a band, where you feed off of each other and try to reach common goals is so inspiring but you also have to be able to compromise and take the back seat from time to time. Doing session work is all about making the customer happy. Giving them what they want and filling a purpose. Bring your own colour to their music and hopefully make it a bit better or come up good with ideas they hadn't thought of. Recording my own music is no compromise. It's my vision, my dream and I can go on until I'm satisfied. But you also have to do everything yourself and that costs a lot of time, energy and money. But I love all!"

Kristoffer also puts time and energy into charity when possible.
In 2015 he released the singel 'Pass The Torch' to raise money and awareness to save the elephants.
In 2018 the album 'We Are Breaking The Chains' was released to raise money and awareness to help out abused children.
'We Are Breaking The Chains' was a rock project that Kristoffer came up with, a collaboration with some of the biggest hard rock artists of The Netherlands, including members of bands such as Within Temptation, Ayreon, Kayak, Textures, Praying Mantis, Martyre, Pictures and more.